My apologies for the tardy and abridged publication of this week’s CLAM review.  My personal circumstances have not permitted me the time I needed to have done a full and timely review.  However, there is a part of the meeting that really needs to be addressed in the interests of truth.

Under the section “Proclaim the Year of Jehovah’s Goodwill”, we are asked to examine Isaiah 61:1-6.  This is an excellent example of eisegesis at work, and it will pass muster with the majority of my Witness brethren who, alas, are trained not to look too deeply.

The organization promotes the belief that the last days started in 1914, that they alone are assigned the task of preaching the  good news, and that this work is done mainly by a subclass of Christian excluded from the ranks of the children of God.  The absence of solid Scriptural support for these teachings forces them to misapply and misinterpret prophecies which have clear application in the Bible to other times and events. This is one example of that technique.

On the first point, the Meeting Workbook provides the following information with a helpful graph. 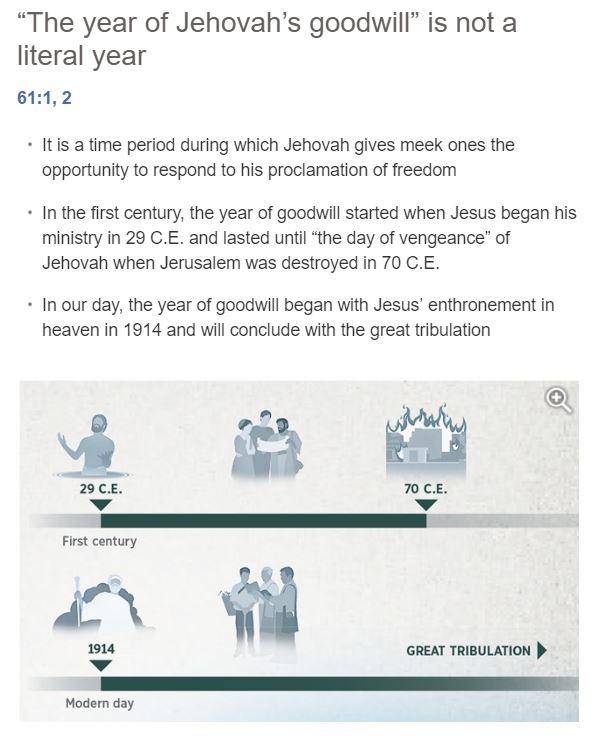 However, the Bible says that these verses were fulfilled in the first century.  Read the account at Luke 4:16-21 where Jesus quotes from these verses in Isaiah and applies them to himself with finality, concluding with “Today this scripture that you just heard is fulfilled.”  No mention of a secondary fulfillment 2,000 years in the future.  No mention of a second “year of good will”.  There is only one year of good will, and yes, it is not a literal year, but neither is it split into two time periods making up ‘two years of good will’.

This self-serving application requires that we accept that Christ returned invisibly over 100 years ago to assume kingly power in 1914; a doctrine we’ve already seen time and again to be Scripturally false.  (See Beroean Pickets – Archive under the Category, “1914”.)

We know the Year of Good Will began with Christ.  However, when does it end?

Also, how are the ancient ruins rebuilt and the devastated cities restored? (vs. 4) Who are the foreigners or strangers who tend the flocks, farm the land, and dress the vines? (vs. 5) Are these the “other sheep” Jesus spoke of at John 10:16?  That seems likely, but we are not speaking of the secondary class of Christian with a secondary hope that Jehovah’s Witnesses proclaim, but rather the gentiles who become Christians and were grafted into the Jewish vine. (Ro 11:17-24)

Did all this end with the destruction of Jerusalem in 70 C.E.? That seems unlikely even if we accept that the rebuilding of the ruins and cities is metaphorical.  Does it end at Armageddon, or is the day of God’s vengeance put off until the final destruction of Satan and his demons?  We need to consider that the rebuilding of ruins and cities certainly hasn’t occurred in our day, nor do the children of God become priests in fulfillment of Isaiah 61:6 until after their resurrection at the start of the 1,000 year reign of Christ, which is still future. (Re 20:4)  So it would seem that a modern-day fulfillment such as the Organization would have us accept is simply not in line with what Isaiah foretold would happen.

But, if you only have a hammer, then you see everything as a nail.

and of course the last sentence recalled Peter Paul and Mary’s “If I Had a Hammer” and naturally had to go watch it again . LOL how appropriate they all had names of disciple’s. But I digress here .

Haha, this is great! I get the reassurance that I’m not insane whenever I read your articles. It’s fits the ‘pattern of healthful words’. I actually had to do this part for the Clam the other night. While preparing the part, my wife had to listen to my rants over the reference material provided in the workbook. “No, it’s not just the anointed who are big trees!” The scripture says all those mourning will have their condition reversed and become like trees. We’re ALL going to be ‘big trees’, and yes, we can all be called anointed too. And that… Read more »

Well done, cx_516. You seem to have walked a delicate line with great balance.

I did not attend the weekend meeting after seeing the Workbook loaded with things that made my eyebrows curl. And your post just validated my worries. 🙂

Hi Meleti.
Thanks for sharing your thoughts on this point.
The 0rganization continues to hammer on about the importance of 1914, afraid that many will wise up to the fallacy of their teachings–Teachings which become harder and harder to sustain with the passing of time–a century long fallacy.