‘They Stopped Doing Gods Will’ is the theme for this week’s ‘Treasures from God’s Word’ which makes for interesting reading. The publications love to interpret scriptures like these as applying to Christendom. Let us examine the Organization of Jehovah’s Witnesses to see if they really do stand apart from the rest of Christendom.

“For from the least one of them even to the greatest one of them, everyone is making for himself unjust gain; and from the prophet even to the priest, each one is acting falsely. 14And they try to heal the breakdown of my people lightly, saying, ‘There is peace! There is peace!’ when there is no peace. 15 Did they feel shame because it was something detestable that they had done? For one thing, they positively do not feel any shame; for another thing, they have not come to know even how to feel humiliated.” (Jeremiah 6:13-15)

If we were to substitute “prophet” with “Governing Body”—since they have prophesied about Armageddon on many occasions—and “priest” with “elder”, how would they stand with regard to the statement, “making for himself unjust gain“?  For instance, recently the Organization seized ownership of all kingdom and assembly halls around the world.  They also obligated the congregations to send any large fund reserves in to the local branch office. Now we learn that halls are being sold around the world without any consultation with the congregations affected.  The money from the sales disappears into the coffers of the Organization, while the local publishers are obliged to travel greater distances to get to halls that are much farther away.  The original halls were built by local voluntary labor and paid for by the local congregation members, yet not only do they get no say whatsoever in the dispensation of their own hall, they also are not even consulted as to where the money goes.  On top of all this, they are still expected to continue contributing to the “worldwide work”.  While some might excuse this as an efficient way to manage limited dedicated funds, there is now mounting evidence that millions of dollars, pounds and euros are being diverted to pay out large penalties in compensation for decades of mishandling of child abuse cases.

Returning to Jeremiah’s words, if we were to substitute “spiritual paradise” for “peace” in the same passage, do we find a correlation?

The Watchtower says: The expression “spiritual paradise” has become a part of our theocratic vocabulary. It describes our unique, spiritually rich environment, or condition, which allows us to enjoy peace with God and with our brothers. (w15 7/15 p. 9 par. 10 “Work to Enhance the Spiritual Paradise”)

The concept that Jehovah has an organization on earth today is well supported in the publications of JW.org as this search reveals. 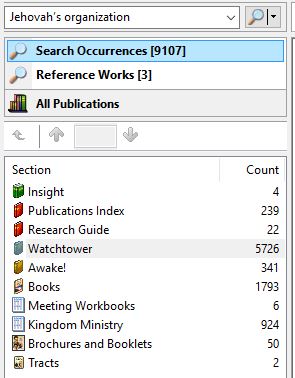 However, neither the terminology nor the concept of “Jehovah’s Organization” is to be found anywhere in Scripture.  Is there truly a spiritual paradise in existence among Jehovah’s Witnesses as claimed, or are Witnesses crying: “Peace! Peace!” when in fact there is no peace?

To answer, we might consider what the Sydney Herald published following the March 10, 2017 public hearing by the Australia Royal Commission Investigating Institutional Responses to Child Sexual Abuse.  Here is a link to the article titled: Inside the Jehovah’s Witnesses: A ‘perfect storm’ for abuse.

The second Scripture in the “Treasures from God’s Word” says:

“The word that occurred to Jeremiah from Jehovah, saying: 2“Stand in the gate of the house of Jehovah, and you must proclaim there this word, and you must say, ‘Hear the word of Jehovah, all YOU of Judah, who are entering into these gates to bow down to Jehovah. 3This is what Jehovah of armies, the God of Israel, has said: “Make YOUR ways and YOUR dealings good, and I will keep YOU people residing in this place. 4 Do not put YOUR trust in fallacious words, saying, ‘The temple of Jehovah, the temple of Jehovah, the temple of Jehovah they are!’ 5 For if YOU will positively make YOUR ways and YOUR dealings good, if YOU will positively carry out justice between a man and his companion, 6if no alien resident, no fatherless boy and no widow YOU will oppress, and innocent blood YOU will not shed in this place, and after other gods YOU will not walk for calamity to yourselves, 7I, in turn, shall certainly keep YOU residing in this place, in the land that I gave to YOUR forefathers, from time indefinite even to time indefinite.” (Jeremiah 7:1-7)

The ancient Israelites put their trust in the fact that they had the temple of Jehovah in their midst and hence Jehovah would not destroy them. But Jehovah through Jeremiah made it plain that the temple’s presence would not save them. What about today? In the Watchtower Library the phrase ‘Jehovah’s Organization’ appears over 11,000 times in the Watchtower, over 3,000 in Books and over 1,250 in the Kingdom Ministry. How many times does it appear in the Bible? Zero!

Is there a parallel to be had between Jeremiah’s warning and the modern-day Organization of Jehovah’s Witnesses?

The May 15, 2006 Watchtower under the heading, “Are You Prepared for Survival?” answers:

“Survival of individuals today depends on their faith and their loyal association with the earthly part of Jehovah’s universal organization.” (p. 22 par. 8)

The CLAM workbook says: “What was Jehovah urging his people to do?” The reference we are guided to is from the November 1, 2005 Watchtower under the title, “Will You Walk with God?”  There, in paragraph 11 (pp. 23, 24) it reads: “Are we really allowing God’s Word to guide us that closely? It is worthwhile to pause at times and examine ourselves honestly.”

If only we were really allowed to do this. But what would happen if that were truly the case? We might find, just like former Catholics and Protestants who have studied with Jehovah’s Witnesses did, that many of our teachings are not actually Bible based. Just take the doctrines of Christ’s Presence beginning in 1914 or the current understanding of “this generation”. How many witnesses can even explain the Organizations official teaching on these, let alone actually support them from Scripture?

Theme: Results of Preaching – “The Fields … Are White for Harvesting”

Paragraph 17 says in part – “First, we rejoice to see Jehovah’s role in the work” and “how Jehovah causes Kingdom seed to ‘sprout and grow tall’”. It then offers Matthew 13:18, 19 and Mark 4:27, 28 in support of these statements.  If you read those verses in context, you will see that neither says anything about Jehovah having anything to do with any of it.  Consider instead the last words of the King of God’s Kingdom, Jesus Christ, just before he ascended to heaven: “And, look! I am with you all the days until the conclusion of the system of things!” So why is attention not given to Jesus’ role as head of the congregation, and Christ’s “role in the work” that is causing “Kingdom seed to sprout and grow tall”?

In paragraph 18 we are exhorted to remember that “Paul stated: ‘Each person will receive his own reward according to his own work‘ (1Co 3:8). The reward is given according to the work, not according to the results of the work.”  How grateful we can be that Jehovah and Jesus have this attitude. It is what we do, willingly, out of our heart that they will bless. Sadly, by contrast, we have to report to the Organization what results we get, so that we can be judged on how spiritual we are and how worthy of ‘privileges’ we are.  It is all results-oriented. How many brothers have been told they do not qualify to be an appointed man, because their hours are not high enough, their placements are not sufficient, their return visits not up to par.  Yet, we may be talking about the kindest brother in the congregation, always helping the elderly, sick, or bereaved, always having time for the little children.  Nevertheless, Jesus sees and Jehovah keeps a record of such acts of mercy. (Mt 6:4)

Paragraph 20 mentions “how the harvest work has proved to be unstoppable”, and then applies the fulfillment of Malachi 1:11 (“from the rising of the sun to its setting”) to the Organization. This is selective application. If “the harvest work” by the Organization is truly “unstoppable“, how do they account for the less than 1% growth and up to 1% decrease in Argentina, Armenia, Australia, Britain, Canada, Cuba, Czech Republic, Denmark, Dominican Republic, Georgia, Germany, Greece, Italy, Japan, Kenya, Korea, Netherlands, New Zealand, Portugal, Slovakia, Sweden, USA, and Uruguay as revealed in the 2017 Yearbook? If you have access to older Yearbooks you will find similar stagnation and decreases during the period from 1976 to early 1980’s, and then again in the late 1990s.  Some will claim that those periods were merely a time of sifting, but the overall statistics do not speak of anything remarkable, that conjures up images of an “unstoppable” work.  As for the application of Malachi 1:11, most Christian denominations have members around the world just like Jehovah’s Witnesses, so if we claim it applies to us, then it must also apply to most other Christian religions.

Finally paragraph 21 restates the claim that ‘a small group of God’s servants has grown into “a mighty nation”’, an argument which we analyzed in the the CLAM review for February 27 to March 5.

Great recap of this CLAM meeting and all other previous Tadua. Recently, my wife has been noticing more and more, the great importance that is put on “the organization”. She never noticed it before, until I finally told her, “pay attention to the meeting, like really pay attention to the words that are used from the stage. You will notice that no one really even questions the audacity of how much importance every single speaker, part, discourse, study, puts on the “organization”, and the importance of being loyal to it”. She finally mentioned to me last week, I heard “the… Read more »

Good to see a review of the midweek meeting. Lots of valid points. When it came to paragraph 20 (which mentions 1919), guess what ? The study conductor asks “And what happened in 1919.. and answers the question with the appointment of “the faithful and discreet slave”. Shame he didn’t try to explain it scripturally. Now that could have been interesting.
Glad you mentioned the spoon feeding of the “Spiritual Gems”. We really have to work so hard to find them don’t we.

A couple of years ago, I started making comparisons to how similar we are to the Catholic church or other religions for that matter. We just call things by a different name. Example we look down on other religions when people give “testimonies” but we do the same thing but we call them experiences. It sickens me to my very core, the sexual abuse cover ups going on inside the Org but condemned the Catholic church for it. The Catholic church felt at one time no one could dispense” food” but the Pope and Priest and denied the people to… Read more »

Amen, Tadua I like how you pointed out: “Consider instead the last words of the King of God’s Kingdom, Jesus Christ, just before he ascended to heaven: “And, look! I am with you all the days until the conclusion of the system of things!” So why is attention not given to Jesus’ role as head of the congregation, and Christ’s “role in the work” that is causing “Kingdom seed to sprout and grow tall”? ‘ I was immersed into the QBKH program from its beginning here in MS, USA. The first Hall the MS, AL, and some LA (I believe)… Read more »

“an argument which we analized in the the CLAM review”. I do believe you mean “analyzed”. What you actually wrote is unseemly.

Thank you for pointing out the unfortunate spelling mishap. Corrected now.