A Journey of Discovery Through Time – Part 2

In our introductory article we laid the groundwork rules and mapped out the destination of our “Journey of Discovery Through Time”.

In every journey there are signposts, landmarks and way pointers. To succeed in reaching our intended destination it is imperative that we follow them in the correct order, otherwise we could end up lost or at the wrong place. Therefore, before starting out on our “Journey of Discovery through Time”, we will need to identify the signposts and landmarks, and their correct order. We are dealing with several Bible books and in addition, as touched on in our first article, the Book of Jeremiah in particular is grouped by subject, rather than written predominantly in chronological[ii] order. We therefore need to extract the signposts (in the form of summaries of key Bible chapters (our source material)) and ensure they are correctly sorted into chronological (or relative time) order. If we do not do this, then it would be very easy to misread the signposts and go in the wrong direction. In particular, it would be easy to go in circles and confuse a signpost with one we already followed and make the assumption it is the same, when it is different because of the surroundings it is in (the context).

One benefit of putting things in chronological or relative time order is that we do not need to worry about assigning modern dates. We only need to record the relationship of one event date to another event date. All those dates or events relating to one King or a line of Kings, put in relative order, can be described as a timeline. We also need to extract the links between different timelines. For example, such as between the Kings of Judah and the Kings of Babylon, and between the Kings of Babylon and the Kings of Medo-Persia. These are described as synchronisms[iii]. An example of a synchronism is Jeremiah 25:1 which links the 4th year of Jehoiakim, a King of Judah with the 1st Year of Nebuchadnezzar, a King of Babylon. This means the 4th year of Jehoiakim coincides with or is simultaneous with the 1st year of Nebuchadnezzar. This enables different and discontinuous timelines to be arranged in the correct relative position time wise.

Many Bible passages record the year and perhaps even month and day of the prophecy or the event, such as the year of the reign of the King. It is therefore possible to build up a considerable picture of the sequence of events solely on this basis. This picture is then able to assist the writer (and any readers) in getting all the important scriptures[iv] in their proper context. This picture of events is also able to act as a reference source (like a map) using a summary of the relevant key Bible Chapters in time order as compiled. The summary that follows was created by using the reference to the dating of events to a month and year of a King’s reign found in many chapters and examining the context and contents of other chapters. The result of this compilation follows in abbreviated form.

The diagram below is a simplified diagram of the succession of Kings for this period constructed in the main from the Bible record. Those Kings with a bold frame are mentioned in the Bible text. The remaining ones are those known from secular sources.

Figure 2.1 – Simplified Succession of Kings of the Period – Neo-Babylonian Empire.

Figure 2.2 – Simplified Succession of Kings of the Period – Post Babylon.

These summaries are ordered in time of writing as much as is practical, while dealing with whole chapters, using information within the chapter, or events which are referred to, which can be assigned a time based on the same event mentioned in another book or chapter which does have a time reference and the same context to the event which makes it clearly identifiable.

Let us start our journey of discovery through time.

Time Period: Written after the attack of King Sargon of Assyria on Ashdod (c. 712 BCE)

Time Period: Beginning of rule of Jehoiakim (v1, Before Jeremiah 24 and 25).

Rest of temple utensils to go to Babylon if you do not serve Nebuchadnezzar.

Time Period: Very Early in Reign of Zedekiah when the deportation of Jehoiachin (a.k.a. Jeconiah), princes, craftsmen, builders, etc., had just finished. (Same as Jeremiah 27, 7 Years after Jeremiah 25).

Time Period: (4th Year of Zedekiah due to events following on from Jeremiah 28)

Time Period: During siege of Jerusalem (10th – 11th Year of Zedekiah, 18th – 19th Year of Nebuchadnezzar, based on events following on from Jeremiah 32 and Jeremiah 33).

Time Period: Likely a month or so after the murder of Gedaliah and flight of remnant to Egypt. (19th Year of Nebuchadnezzar)

Time Period: Likely a month or so after the murder of Gedaliah and flight of remnant to Egypt. (19th Year of Nebuchadnezzar) 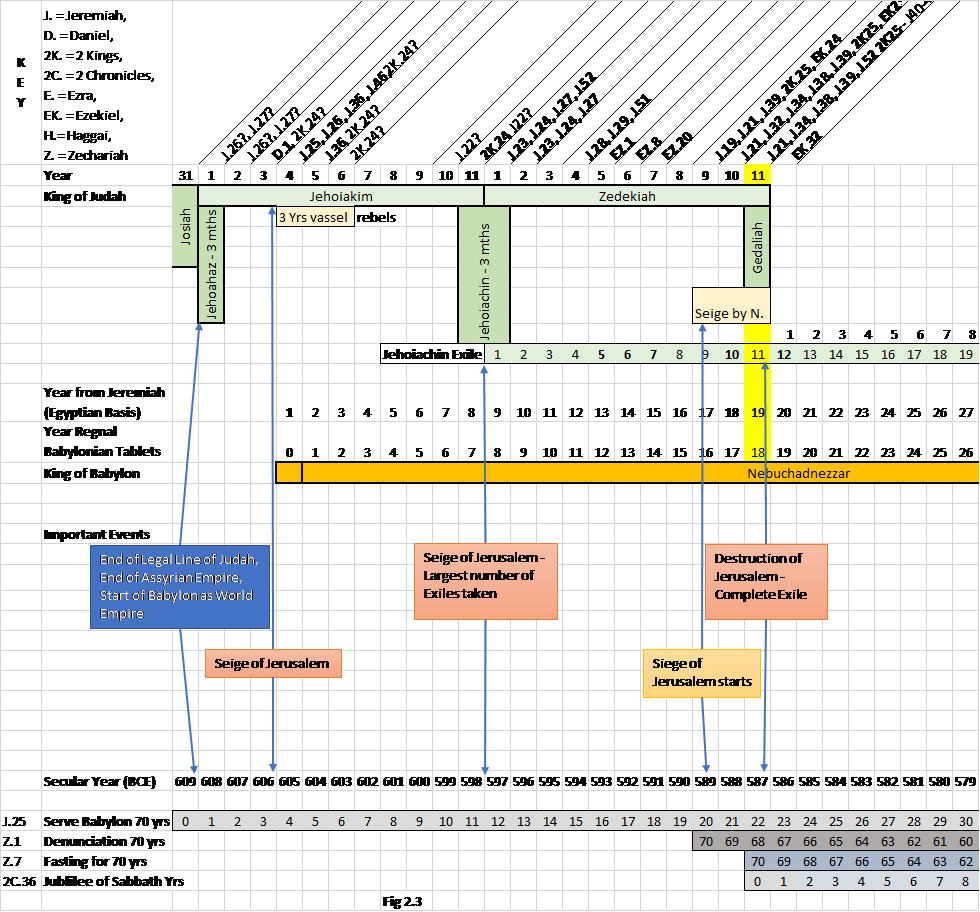 This section of summaries of relevant Bible chapters is concluded in our 3rd article in the series, continuing on from the 19th year of Jehoiachin’s Exile.

[i] Arranged chronologically as far as possible according to time written as recorded in the Bible text.

[iv] All scriptures quoted are from the New World Translation of the Holy Scriptures 1984 Reference Edition unless otherwise stated.

[v] Daniel 2:36-38 ‘This is the dream, and its interpretation we shall say before the king. You, O King, the king of kings, you to whom the God of heaven has given the kingdom, the might and the strength and the dignity and into whose hand he has given, wherever the sons of mankind are dwelling, the beasts of the field and the winged creatures of the heavens, and whom he has made ruler over all of them, you yourself are the head of gold.’

[vi] In the Book of Jeremiah, the years of Nebuchadnezzar appear to be counted as per Egyptian reckoning. (This is likely because of the Egyptian influence around the end of King Josiah’s reign and into Jehoiakim’s reign and that Jeremiah completed writing his book in exile in Egypt.) Egyptian reckoning for Kings did not have a concept of regnal years like the Babylonians and did not have an accession year as year 0, but rather as a partial year One. Hence when reading Year 1 Nebuchadnezzar in Jeremiah this is understood to be equivalent to Year 0 Babylonian Regnal Year as found on cuneiform tablets. Any quotation from the Bible will use the Biblical Year recorded (or calculated). For reading any secular documents recording cuneiform data for Nebuchadnezzar we therefore need to deduct 1 Year from Nebuchadnezzar’s Biblical year of reign to obtain his cuneiform Babylonian Regnal Year Number.

[vii] Scripture verses in BOLD are key verses. All scriptures will be discussed in detail later.

[viii] See later discussion of Jeremiah 25:15-26 in the Section: Analysis of Key Scriptures.

[ix] Jeremiah 24:5 NWT Reference 1984 Edition: “Like these good figs, so I shall regard the exiles of Judah, whom I will send away from this place to the land of the Chaldeans, in a good way”. NWT 2013 Edition (Grey) “whom I have sent away from this place”. This revision means the NWT now agrees with all other translations and shows Jehovah through Jeremiah was referring to those who had just been taken into exile with Jehoiachin, as Nebuchadnezzar put Zedekiah on the throne.

[xiv] Additional summary of Lachish Letters translation and background available from the author.

A Journey of Discovery Through Time – Part 3

A Journey of Discovery Through Time - An Introduction - (Part 1) - Beroean Pickets - JW.org Reviewer

Hi Tadua.
Your series of articles “A Journey of Discovery Through Time” is very interesting but also comprehensive material for thought. Please, will you continue with the next part 3?
Frankie.

Hi Frankie, Further parts have been prepared and will be published shortly. Thank you for your interest in this subject.
Tadua

Thanks Tadua, from Alithia. The printer is rattling away and save as, is busy too. I like the expression “digestible” as I like the color charts with guidance boxes too! It is all making sense and laid out in a logical progressive manner that is easily “digestible”. These additions were lacking in the Gentile Times Reconsidered book and it makes it so much easier to grasp the relationships between the time lines of all the kings as they relate to the biblical narratives. Thanks so much for taking the time to present this material in such an easier to understand… Read more »

Thank you Tadua. That looked like a lot of work, and very useful, although somewhat overwhelming. I am pleased to see your highlight on 2 kings 25 27-30, which I hope you will be discussing. That verse brings us to Evil Merodach (or Amil Marduk), whose rule is only 2 years. WT has to extend this period to fit with their interpretation, with no justification.
I shall keep quiet now, as I can see you have highlighted many other verses.
All the best to our readers.

Thank you, Leonardo, in answer to your question, yes all important scriptures are examined individually. There are a number of parts to come, in an effort to make the subject digestible.

With such a comprehensive summary of Bible book chapters it is difficult to understand how you will establish your theme’s date. Do you plan on restricting your inclusion of scriptures to those relevant to defining your purpose in a future article?

Yes the main journey narrative will be examining 16 key points in depth and then concluding providing a bullet point summary for reference.