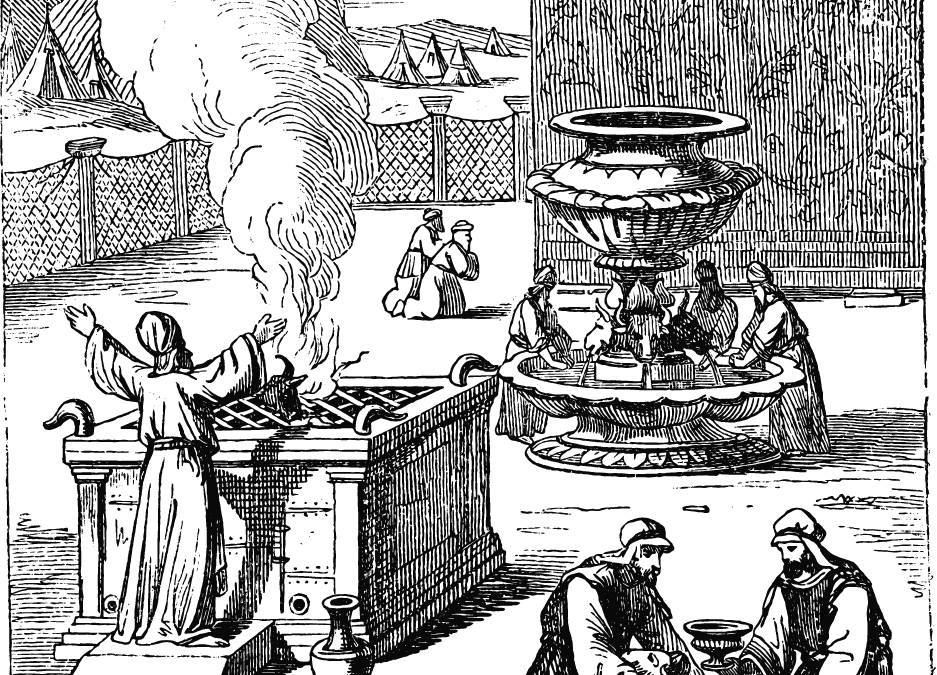 By analyzing the historical and cultural frameworks within the biblical context, we concluded that the text cannot be used to support a doctrine that prohibits the safeguarding of life through medical treatment by using human blood or its derivatives.

This final article of the series analyzes the last two bible texts which Jehovah’s Witnesses use in an attempt to justify their refusal to receive blood transfusions: Leviticus 17:14 and Acts 15:29.

Approximately 600 years after the law on blood given to Noah, Moses, as the leader of the Jewish nation at the time of the exodus, was given a law code directly from Jehovah God that included rules on the use of blood:

Was there something new in the Mosaic Law that added or altered the law given to Noah?

Besides reiterating the prohibition against consuming meat that was not bled, and applying it to both Jews and alien residents, the law required that the blood be poured out and covered with soil (vs. 13).

In addition, anyone disobeying these instructions was to be put to death( vs. 14).

An exception was made when an animal had died of natural causes or had been killed by wild beasts since proper dispensation of blood would not be possible in such cases.  Where someone ate of that meat, he would be considered unclean for a period of time and undergo a purification process.  Failure to do so would carry a heavy penalty (vss. 15 and 16).

Why does Jehovah change the law on blood with the Israelites from that given to Noah? We can find the answer in verse 11:

Jehovah did not change his mind.  Now he had a people serving him and he was establishing the rules to preserve his relationship with them and lay the foundation for what was to come under the Messiah.

Consider the context of chapters 16 and 17 where we learn about the use of animal blood for ceremonial and ritual purposes. It involves:

It is important to emphasize that if the ritual was not performed as prescribed in the Law, the High Priest could be cut off just as any other person would be for eating blood.

Bearing this in mind, we might ask, what does the command of Leviticus 17:14 have to do with Jehovah’s Witnesses’ No Blood doctrine?  It would appear that it has little to nothing to do with it. Why can we say that? Let us compare the elements stipulated in Leviticus 17 for the ritual use of blood for the redemption of sins as they might apply to administering a life-saving transfusion to see if there is any correlation.

A transfusion is not part of a ritual for the redemption of sin.

During a medical procedure what we do have is the following:

Therefore, Jehovah’s Witnesses have no scriptural basis for applying Leviticus 17:14 as support for their policy of forbidding blood transfusions.

Jehovah’s Witnesses are comparing the use of animal blood in a religious ritual to redeem sin with the use of human blood in a medical procedure to save a life.  There is a great logical chasm separating these two practices, such that there is no correspondence between them.

Romans used animal blood in their sacrifices to idols as well as for food. It was common that an offering was strangled, cooked, and then eaten. In case that offering was bled, both the flesh and blood were offered to the idol and then the meat was eaten by attendees to the rite and the blood was drunk by the priests. A ritual celebration was a common feature of their worship and involved the eating of sacrificed meat, excessive drinking and sex orgies. Temple prostitutes, both male and female, were a feature of pagan worship.  Romans would also drink the blood of gladiators killed in the arena which was thought to heal epilepsy and act as an aphrodisiac.  Such practices were not restricted to the Romans, but were common among most non-Israelite peoples, like the Phoenicians, Hittites, Babylonians, and Greeks.

We can deduce from this that the Mosaic Law with its prohibition against the eating of blood served to establish a distinction between Jews and pagan creating a cultural wall that prevailed from the time of Moses onward.

Around the year 40 C.E., the apostles and older men of the congregation in Jerusalem (including the visiting apostle Paul and Barnabas) wrote a letter to be sent to the congregations of the gentiles with the following content:

“For it seemed good to the Holy Ghost, and to us, to lay upon you no greater burden than these necessary things; 29That ye abstain from meats offered to idols, and from blood, and from things strangled, and from fornication: from which if ye keep yourselves, ye shall do well. Fare ye well.” (Acts 15:28,29)

Is there anything new here, not in the Mosaic Law? Apparently. The word “abstain” is used by the apostles and “abstain” seems to be quite privative and absolutist as well. This is why Jehovah’s Witnesses use “abstain” to justify their refusal to use human blood for medical purposes. But before we give in to preconceptions, personal interpretations and points of view that could be wrong, let us allow the scriptures tell us by themselves what the apostles meant from their perspective by “abstain”.

The Gentile Christian congregation grew after 36 C.E. when Peter baptized the first non-Jew, Cornelius.  From then, the opportunity for people of nations to enter the Christian Congregation was open and this group was growing very rapidly (Acts 10:1-48).

This coexistence among Gentile and Jewish Christians was a great challenge.  How could people from such different religious backgrounds live together as brothers in the faith?

On the one hand, we have the Jews with their law code from Moses controlling what they could eat and wear, how they could act, their hygiene, and even when they could work.

On the other hand, the life styles of gentiles violated virtually every aspect of the Mosaic Law Code.

From reading the 15th chapter 15 of the book of Acts, we get the following information from the biblical and historical contexts:

Note what scriptures are telling us about this problem:

Due to differences in cultural backgrounds, the coexistence between Gentile Christians and Jewish Christians was going through many difficulties.

Jewish Christians were trying to impose the Mosaic Law onto the Gentiles.

The Jewish Christians recognized the non-validity of the Mosaic Law because of the grace of the Lord Jesus.

The Jewish Christians were concerned the Gentile Christians might slip back into false worship, so they forbid those things related to pagan religious practices.

Idol worship was already prohibited to Christians. That was a given. What the congregation of Jerusalem was doing was explicitly prohibiting practices connected to false worship, pagan worship, that might lead the gentiles away from the Christ.

Now, we understand why James put things like eating strangled animals or flesh used in sacrifice or blood on the same level as fornication.  These were all practices connected to pagan temples and they could lead the gentile Christian back into false worship.

What does “abstain” mean?

The Greek word used by James is “apejomai” and as per Strong`s Concordance means “To keep away” or “To be distant”.

Again, we have found that the word used by James is related to the action of eating or consume by the mouth.

With this in mind, let’s again consider Acts 15:29 using the original Greek meaning of “abstain”:

After this analysis we may ask: What does Acts 15:29 have to do with blood transfusions? There is not a single connection point.

The organization is attempting to make the eating of animal blood as part of a pagan ritual equivalent to a modern life-saving medical procedure.

Is the Apostolic Law still valid?

There is no reason to assume it is not.  Idolatry is still condemned.  Fornication is still condemned.  Since the eating of blood was condemned in the time of Noah, the prohibition reinforced in the nation of Israel, and reapplied to gentiles who became Christians, there seems to be no basis for suggesting it no longer applies.  But again, we are talking about ingesting blood as food, not a medical procedure that has nothing to do with alimentation.

The Law of the Christ

The Scriptures are clear as to idolatry, fornication, and consuming blood as food.  As to medical procedures, they are wisely silent.

Having established all of the above, be it noted that we are now under the law of the Christ and as such any decision made by the individual Christian pertaining to any medical procedure he or she authorizes or declines is a matter of personal conscience and not something requiring the involvement of others, particularly in any judicial character.

Our Christian Freedom includes the obligation of not imposing our  personal viewpoint onto the lives of others.

Remember that the Lord Jesus taught:

Since the life is in the blood, would a loving God condemn you were you to donate part of our life (human blood) to save the life of a relative or our neighbor?

It is our hope that this series of articles has helped our Jehovah’s Witnesses brothers and sisters to reason from Scripture on this life-and-death issue and to make their own conscientious determination in lieu of blindly following the dictates of a group of self-appointed men.

Blood – "Sanctity of Life" or "Ownership of Life"?

[…] the final segment we will examine the two remaining textual legs of support for the No Blood Doctrine, namely, […]

Thank you Judah for a well written and thought provoking article. Hello Leonardo, and Fani… I translated your comment and enjoyed it. This way of examining the context of scripture is so enjoyable and helpful. Your comments, Judah, make perfect sense when we read scripture exegetically. It never made sense to me that so much of our lives and decisions should be controlled by laws that were given to very different people in very different times. Especially since the last law given in the Bible is The law of the Christ, so why should anyone go searching for laws to… Read more »

Simple and clear, Judah. and thank you for your comments , Fani.

That little explanation of the word abstain is so useful. I really appreciated that, and will try to hold it somewhere in my memory. I have read it, thought about it, and trust Jehovah will bring it back to my mind when needed.
the rest of the article was really well presented. If you have learned this from Eric, then thanks also to him for the way he is teaching.